Across Latin America and the Caribbean, more than one million people have already died from Covid-19, making it the worst-hit region worldwide. The reasons are complex but, undeniably, have exposed deep inequalities across the region’s 33 countries.

Latin America’s excess death toll – those that exceed the number that normally occur over a given period – has rocketed. The failure by many countries to establish an effective public health strategy has been compounded by overwhelmed and underfunded health systems and social protection mechanisms that have not responded adequately to the enormity of the crisis.

The slow response – or in some instances complete inertia – of many nations has sealed their fate. ‘Governments in certain countries adopted a position of denying the pandemic and not establishing policies to control it,’ says Fernando Peláez-Pier, former IBA President and a senior consultant at FPeláez Consulting.

Last month UK-based company Monterrico Metals agreed to an out-of-court settlement to 33 Peruvian farmers over claims of abuse during protests in Rio Blanco in northern Peru in 2005. As incoming President Ollanta Humala lines up his cabinet, there are still many questions hanging over the exploitation of Amazon territory and the treatment of indigenous communities.

As with many other Latin American countries, Peru is no stranger to protests over mineral exploitation or other energy-related projects. Yet as a country which has some of the most sought after mineral resources in the world, the recent case with Monterrico has exposed the ugly side of foreign investment in Peru. In August 2005, 33 farmers were taking part in a protest over human rights when they were detained and tortured at a copper mine owned by Monterrico in Rio Blanco. Five protesters were shot and two female protesters were sexually abused in the attack. Although the exact amount of compensation has not been disclosed, the settlement marks a significant milestone in accountability and corporate social responsibility for mining companies in the country. Richard Meeran, a partner at UK firm Leigh Day & Company that represented the farmers, said “This constitutes a salutary lesson for multinationals operating in developing countries.” 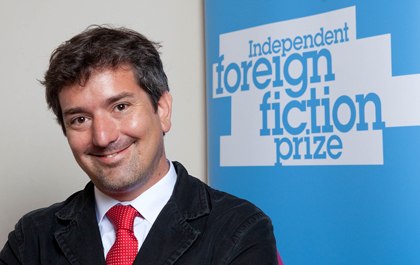 Here is my interview with Santiago Roncagliolo for Booktrust:

In the busy hub of Foyle’s cafe, I meet the winner of this year’s Independent Foreign Fiction Prize, Santiago Roncagliolo. In spite of the building publicity surrounding the Prize over the past few weeks, it is unlikely that any of the other cafe goers would think twice to look at Roncagliolo. A Peruvian-born writer, he moved to Spain ten years ago and his political thriller Abril Rojo (Red April) was awarded the prestigious Spanish literary prize the Premio Alfaguara de Novela in 2006. However, until last Thursday, he has remained, relatively unknown elsewhere in Europe. Now at the age of just 36, he has triumphed once again and has become the youngest ever recipient of the IFFP for Red April.

Foreign demand for Peru’s abundant mineral resources has seen it ride out the global recession better than most. Yet, the revelation earlier this month that a Peruvian indigenous leader is considering joining the presidential race next April highlights the extent to which financial investment and exploitation of Amazon territory has become an increasingly polarising social and political issue in Peru.
Published on 31-08-10. Read on here