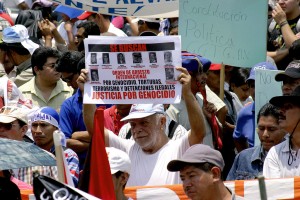 On 10 May it looked as if history had finally been made when former Guatemalan dictator General José Efraín Ríos Montt became the first person ever to be convicted of genocide in a domestic court.

86-year-old Ríos Montt, who came to power in Guatemala following a coup on 23 March 1982, stood accused of implementing a counter-insurgency policy that massacred more than 1,700 and displaced thousands of other members of indigenous group the Ixil Maya in 1982.

The three-judge panel ruled that Ríos Montt should be sentenced to 80 years in prison, which includes 50 years for genocide, with an additional 30 years added to his sentence for crimes against humanity.

The verdict in itself was of unparalleled historic significance for Guatemala, Central America and human rights as a whole. However, despite the damning 718-page judgment released on 17 May, just ten days later the country’s Constitutional Court dramatically overturned the ruling, effectively resetting the trial back to 19 April.