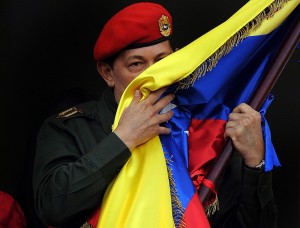 Following his winning bid for re-election in October 2012 – beating nearest rival Henrique Capriles by a nine per cent margin – Venezuela waited with bated breath to see its President, Hugo Chávez, sworn in for another six-year term last Thursday.

However, on 10 January 2013, or ‘10E’, as it has often been referred to by the press and on social networking sites, Chávez was nowhere to be found in Venezuela. Instead he was reportedly still in Cuba, recovering from complications following a fourth cancer operation which took place on 11 December 2012.

Unlike Chávez’s previous trips to Cuba for medical treatment, no up-to-date images of the President have been released since the operation and a prolonged silence – notably even on his Twitter account – has provoked widespread concern over the President’s health, his succession plan and a rumoured impending power vacuum.